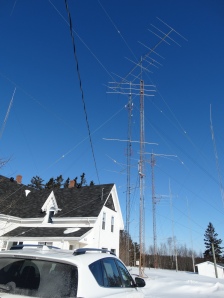 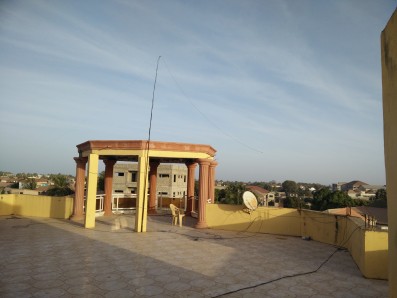 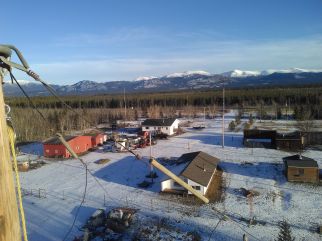 Still at the bottom of the solar cycle conditions were very similar to 2018, all activity concentrated on the bottom end of the HF bands, 80,40 and 20 with a sprinkling of QSOs on 15. Though judging by comments from some of the Caribbean stations 15 might have been more open than entrants thought. For a good part of February the sun was spotless with occasional eruptions.

The activity analysis of the entire entrant log shows a similar picture to last year. Despite conditions, the total number of entrants at 275 has reverted to the levels of previous low-sunspot years and appears generally stable. Activity was helped again by a number of HQ stations especially those from Australia. (The detailed activity analysis is shown on a separate linked page.)

The numbers of entrants by section, Open, Restricted, HQ/Multi op also seem to be roughly unchanged, but bear in mind that the number of sections has changed over the last few years, still the plot is indicative. 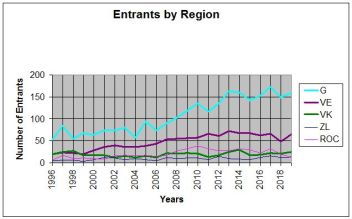 And a similar picture is seen in the number of entrants by region.

The percentage of stations using cluster support in the assisted catagory for the Open and Restricted sections continues to increase.

Call Areas in the logs include

As usual the top positions in the open section was fought over fiercely but in the end there was a clear winner, VY2ZM. As ever it was the marginal bands which proved to be the deciding factor. Both VY2ZM and ZF2CA, Colin, the second placed station were able to exploit the short marginal openings on 15m which were not available to VE stations further west at all. However ZF2CA or the third placed station, VE9CB, Dave, were not able to match the 80m performance of VY2ZM in either numbers of QSOs or bonusses. In other respects on 40, 20 the top three stations were very evenly matched. VE3CB suffering on 15 with no propagation.

Leading station in the open unassisted section was Jeff Briggs, VY2ZM, who amassed a score of 8320 points from his well equipped station on prince Edward Island. Noteable in his entry is the excellent score of QSOs and bonusses on 80m, 210 Qs of which 60 were bonus scoring contacts.

Here is a view of that potent 80m 4 square on the banks of the St Lawrence seaway.

Second place goes to ZF2CA, Colin operating from the ZF1A club station on Grand Cayman. Colin comments,” I had a good time in the 24 hour open HP section with propagation seeming better than last year: Far lower QRN on 80 (though many of you had to send the numbers a good few times), good runs on 40 and 20 with 15 m often best especially to VK/ZL although the band would often seem empty.” 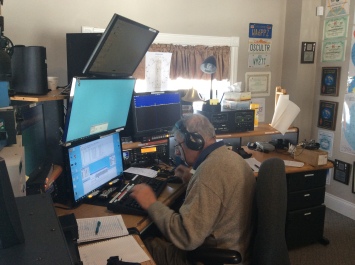 Leading G station and winner of the Col. Thomas Rosebowl, is Don, G3BJ, having fully overcome the antenna problems in 2018. Don made sure that he worked as many UK based HQ stations (5)  on 10m as he could for those useful extra bonus points. On conditions, “These manifested as relatively poor LF conditions, moderate conditions on 20, poor on 15 and almost nil on 10m. I felt that this was a weekend where SO2R was likely to be helpful, and so it proved”.

Winner of the Resticted Unassisted Section is Peter, VP9I, operating from VP9GE’s  shack.

Peter had a comfortable lead over Don, C56DF.

Although Don, C56DF, clearly had much better 15m conditions than Peter’s 80m conditions more than made up the difference.

Brian,VK3MI, came third. Reading his notes it seems that he might have found a way round the high levels of urban noise in Melbourne.

Leading QRP station with 66 QSOs under very challenging conditions was M0RYB/P. he wins the Lilliput Trophy. Runner up was GM4M and G3SXW was third.

One of the most interesting QRP operations was videod by VK3YE

Canada takes the top three places in this increasingly popular section. The leading operator in this section is Vlad, VE3JM, he takes the  Roseberry Shield.

26 stations entered this section, the leading station was Jim, G3RLE, with VE3YY in second place and ZL2RX in third.

There were 3 remote stations active this year, VO2AC, ZL1TM and VY1AAA (did not submit log). View of Whitehorse in the Yukon from the antennas at VY1JA, the remote station, VY1AAA.

The Commonwealth Traveller Certificate is awarded to Don, G3XTT, who operated as C56DF. Here is link to a Practical Wireless article on BERU propagation Don wrote a few years back.

The Commonwealth Medal is awarded to long term stalwart of BERU namely Mike Groom, VE3VHB. Mike was first licenced in 1950 as G3GWO and dabbled in BERU right from the start. he moved to Canada and became VE2AYY before moving again to become VE3VHB. His best entry was back in 1992 when he was the leading VE2 station. Much more background is in the book Reflections in a Rosebowl pages 91 and 92. You can access the book on line. Thanks for all the QSOs and bonusses, Mike.

If this table looks rather ragged you have to blame the editor in WordPress. Its driving me mad.

HQ Stations have proven very valuable stimulators of activity under the present challenging conditions. Although the most active stations, at least as far as the number of QSOs, are those based in the UK, GB5CC, G6XX, the UK regional variations GM6XX/GI6XX/GW6XX and GM3DR (resurrected from yesteryear)  the most important initiative this year was by the Australian operators. No fewer than six VK HQ stations were active,  ‘VK 2,3,4,5,6,7, WIA’. This was a fantastic effort and we are sure added greatly to the extra activity. Canada fielded stations 4 stations, VA2RAC, VA3RAC, VE7RAC and VY1RAC. Many thanks to all concerned and we hope you will all be active every year.

Rest of the Commonwealth

Nothing stood out in the logs this year apart from a few late entries which were included as check logs.  The entrants will know they were late as the robot reports that back to the entrant and there wasn’t anything else that merited a comment.