In 2014 we stayed at a hotel, Petite Anse, close to the town of Sauteurs on the north coast of Grenada. this year I was keen to try it as a possible location for a future year. 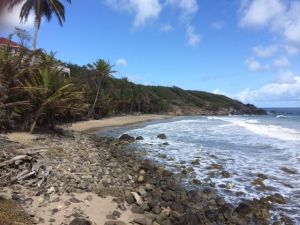 Petite Anse has a semi private beach ( all beaches in Granada are public) which seemed to be very quiet when we were there in 2014. The picture is looking north. Several of the beach front chalets are pretty close to the beach edge and are elevated on a steepish hill-side. 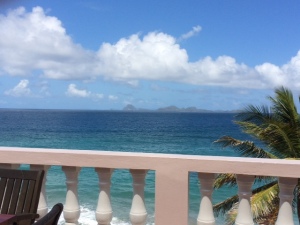 The beach runs roughly NNW to SSE and faces about 80 deg. But it is flanked by headlands and is screened to the west by the steeply rising ground ( where The Heights is located).

The view is from the bar restaurant area and shows the island chain  to the north.

The owners readily agreed to my request to use my radio and placed no restrictions on where I could put the antenna.

That said, I did not block any other guests sea view with my modern sculpture. We were allocated one of the nearest chalets to the beach itself such that a 20M run of coax reached nearly to the high tide line.

I mounted the Butternut in the sand and guyed it to 3 palm trees. I ran some radials across the beach towards the sea edge and buried them in a layer of sand. Below the dry surface sand it was pretty damp.

I operated on HF for about an hour after lunch and around sunset. The bands were in pretty poor shape most of the time due to the solar disturbances. Late in the evening, after dinner I operated on LF too. Results were pretty good all things being considered. After a day or two I decided to add a single wire resonant on 30m from the coax terminal on the Butternut, with its other end supported by some string thrown over a convenient palm tree. This worked surprisingly well with long pileups from Europe and the USA. I guess J3 isn’t on 30 very often. The site was noisier than The Heights as you might expect, I could hear the noise level rise as I turned on the LED lights in the chalet.

I didn’t think this location was as good as The Heights bearing in mind the disturbed propagation but certainly for casual holiday operation it was first class, and the amenities are super XYL friendly. Many thanks to Phillip and Annie and the staff for their hospitality and support. They have created a wonderful hotel.

This site uses Akismet to reduce spam. Learn how your comment data is processed.