I’ve previously operated the Commonwealth Contest from 9G and VP9 and enjoy being able to run UK stations. From home, I tend to find it something of a drag! So, for a few years now I’ve harboured thoughts of heading off as a contest traveller. C5 took my fancy – West Africa propagation is always good and I got to know the country a bit on the C5X trip and one subsequent visit. But that still left two requirements – a licence and a QTH. I’ll spare the long story – suffice to say that this year both fell into place. That said, I saw this as a low-key effort to see if everything turned out as hoped – I wasn’t go to pay for stacks of extra baggage (linear, Hexbeam, whatever) when the licence situation was still somewhat fluid. Incidentally, Sigi DL7DF got in touch a couple of weeks ago to ask my secret. The C5DL team – on next month – were struggling to get their paperwork. It now seems it had been ‘mislaid’ while mine had actually been processed. The good news is that they now have theirs so I didn’t feel the need to be madly QRV for non-Commonwealth before the contest – just some sporadic efforts to check out the gear, antenna and propagation.

The QTH is a second-floor apartment, with a flat roof above. The roof is about 18m wide so I envisaged a 40m dipole with links for 20 and 15 – didn’t plan anything for 10. I rather discounted 80m – not sure how to do it from the roof (the building is surrounded by private property on two sides, albeit open, and dirt roads on the other two sides). Rig is my IC-7300 (with SOTAbeams Contest Console for easy access to stored messages) and Begali Traveller key. Logged with SD.

Pre-contest operation on 20 suggested that antenna (centre about 50ft above ground, given the roof and a SOTAbeams ‘rugged pole’) and 100W was getting out quite well. Band changing would, of course, require walking up to the roof each time to change links – only takes a couple of minutes but meant no instant QSY when requested. But given that 15m had been very quiet in the days prior to the contest, I had a last-minute urge to find at least a makeshift solution for 80m. I decided simply to cut two 33ft extensions for the 40m dipole and, quite literally, throw them over the parapet of the building. What’s to lose?

As expected, the contest started strongly on 20, with a smidgeon of 15m. 40 started while it was still daylight here, with some early loud UK signals. Unfortunately, in the key 1800 to 1900 spot, I suffered four power outages, albeit three were only for about 10 minutes each (the power was fine for the rest of the contest, fortunately). I had been worried about local noise, given that the QTH is in a built-up area (and EMC matters are hardly a priority in the third world) but actually heard well most of the time (QRP operators G3JNB on 20 and GW0VSW on 20 and 40, to mention two I know about that found their way into my log).

When 40 started to dry up a bit after midnight I listened on 80 and heard a couple of signals, so decided to try out my Heath Robinson antenna. I worked VE3EJ, G6XX and G3BJ – the only stations I was hearing. Oh well, at least a few bonus points (Don’s report mentioned that I wasn’t strong – i.e. I was weak!). I decided to get a bit of rest as there wasn’t much else doing. But, come 0300, when I checked 80m again the noise had almost disappeared and the band was buzzing! I worked a bunch more and G3BJ (and others) were huge (but, of course, Don was already in the log). So, taking the Heath Robinson route really did pay off in the end. 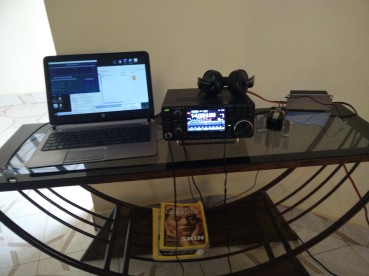 Anyway, nothing earth shattering – if I return it will definitely be with a linear and a gain antenna because I prefer to be loud (it was, for example, frustrating to hear G3SVK respond to one call from Nigel 3B8XF on 40, while I didn’t even merit a QRZ?). That said, QSB was a constant, especially on 20 – loud callers would suddenly take a downturn and patience was required to complete the QSO. Some QSOs were ESP so take the claimed score below with a pinch of salt – there will certainly be reductions:

I missed Dom in C6 completely and only two ZL and one VK. 20m on Sunday morning was like taking part in an 80m CC CW event – lots of familiar calls! It still amazes me, though, that some UK stations are consistently loud while others manage to be barely audible (below those, for example, that I know to be running 100W and wires). How do they manage to be so weak, hi? And, yes, I did work (and log) quite a few non-Commonwealth callers, if only to pass the time. I don’t mind so long as they stand by while I work BERU callers. Those that don’t play fair don’t get a QSO!

Anyway, I’m delighted to have pulled this off and to contribute a few meagre points to my team of fellow travellers.